[WP:SOP] “Statement of principles from Wikipedia founder Jimbo Wales, as updated by the community since then. 7.”)

“The relative prominence of each viewpoint among Wikipedia editors or the general public is not relevant & should not be considered,”

No, “The Who” is actually really British !

(as opposed to some “furreigner” who plops across the pond, wants to pound one of your pelts after a celebrity hunt, pops it in his bonnet, pip-pips about, and mounts it up on his rented wall along with what’s left of his balls)

JimCrow’s ’bout as “libertarian” as Fidel Castro with a gun in his hand and (f)lies between his teeth; from traveling with the windows down

Stephen Colbert shoulda seen that comin’ from a 8 mile away

I think a refund’s in order

And here’s your free school Insolence to go with it

What would “Jymboree” know about “free speech” and “Internet freedom,“ anyway ?

How many days did you serve your country in the United States military ?

Oh, you did NOT realize that while you were in San Diego, you could have signed that contract ?

“Some users have also disputed the Latinized version of “Jimbo.”“

1. “Wikipedia’s success to date is entirely a function of our open community”

“The Skeptics,” who serve as gatekeepers of the Burzynski Clinic article, and who cite Dr. David H. Gorski a/k/a “Orac” aka GorskGeek as if he were a “reliable source”

“The Skeptics,” who bring new meaning to the term “Wikipedia Zero”

“The Skeptics,” who are Intellectual Cowards like their false god Gorski, the Closet Communist of Science-Based Medicine a/k/a Science-Basted Medicine aka Science-Based Mudicine (Spinning Bowel Movement), Wiki Wordsmith Wannabes, nut-jobbers, stale from their failure at the National Peanut Festival in Dothan, Alabama
——————————————————————
3. ““You can edit this page right now” is a core guiding check on everything that we do”

“Both are objectively valuable moral principles”

“Be honest with me, but don’t be mean to me” 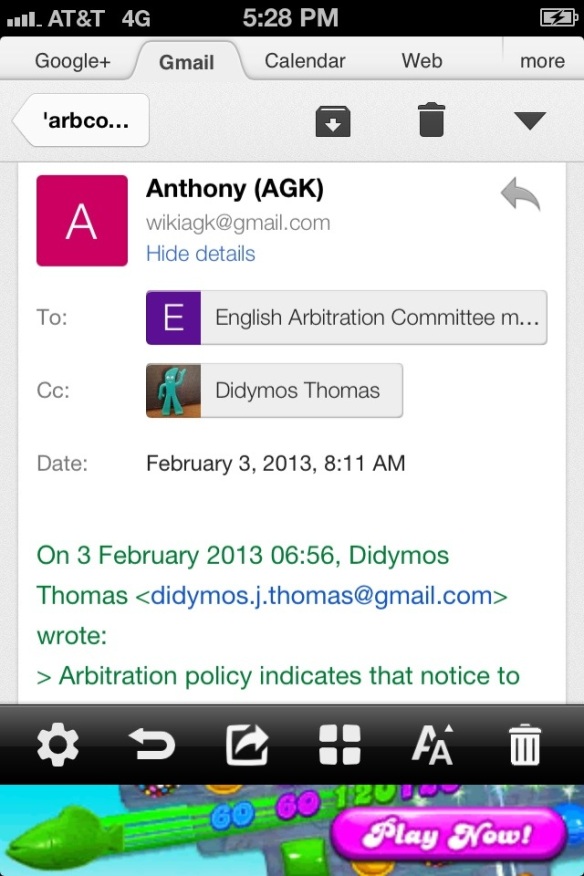 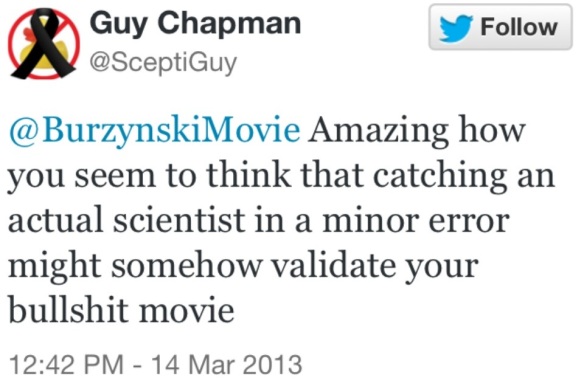 “The common purpose of building an encyclopedia trumps both”

Arthur Rubin, I’m not sure what relevance your above post has re WP:NPOV since the article includes statements from attorneys representing both sides 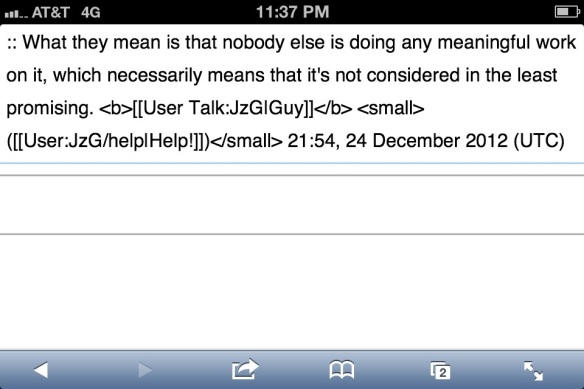 “Nobody else is doing meaningful work on it” ?

1. I pointed out to Wikipedia, a 12/17/2012 scientific publication re antineoplastons, which referenced Burzynski @ 22. (antineoplaston AS21)

“What they mean is that nobody else is doing any meaningful work on it, which necessarily means that it’s not considered in the least promising.”

“…nobody else is doing any meaningful work on it…” 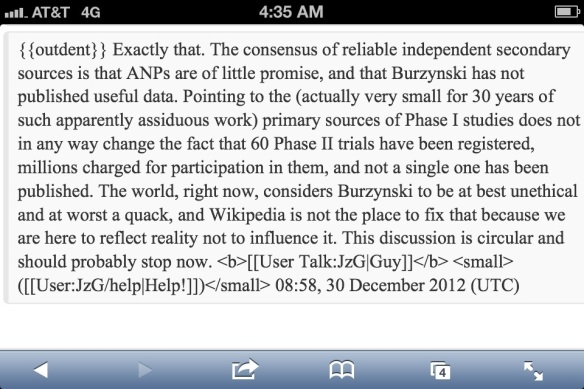 “The world, right now, considers Burzynski to be at best unethical and at worst a quack…”?

Since when did Wikipedia conduct a world-wide “opinion poll” re Burzynski ?

And if Wikipedia is correct, how did this happen ?

Burzynski referenced by other Cancer researchers: 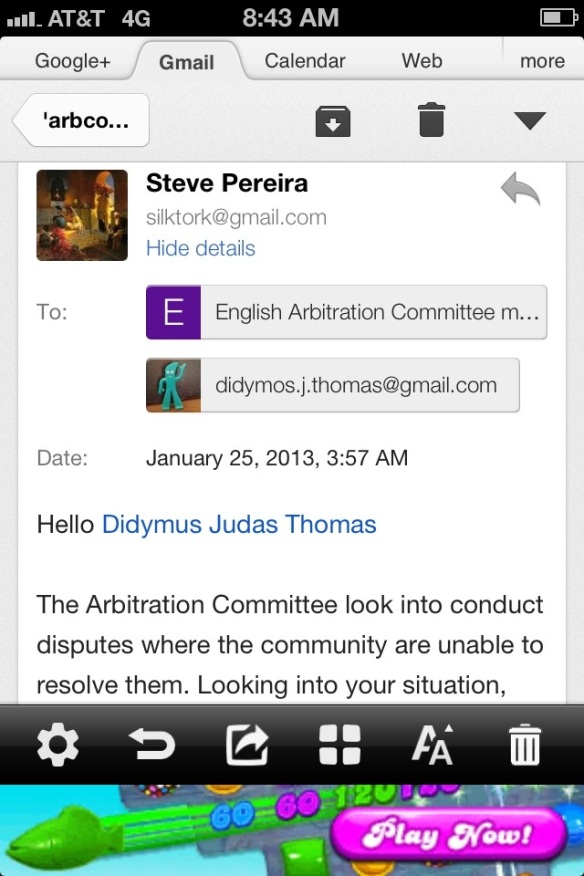 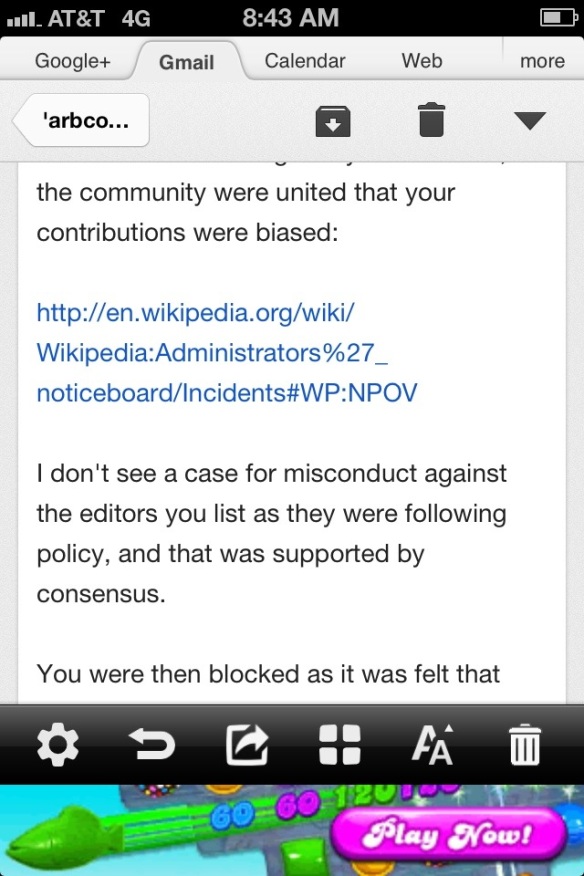 “The relative prominence of each viewpoint among Wikipedia editors or the general public is not relevant & should not be considered,”

But that was not what the study concluded

I feel that the average reader reading this will read it as meaning a study was done & completed with the necessary # of people for an effective study, when that was not the conclusion as pointed out in my above post

Thank you very much.”

“NO RESPONSE” from the “mini-b” (a/k/a “mini-brain”), wannabe Fascists who are so zealous about using their alleged “Fair and Pithy” “found no benefit” WikiWhOReD; which they utilize in an effort to deceive those who are NOT smarter than a fifth-grader

These WikiPimps are so certain of the righteousness of their evangelical cause, that they do NOT even have the “GRAPEFRUITS” to use what the study’s conclusions actually said, and let the chips fall where they may

There are a lot of “chips” falling at Wikipedia 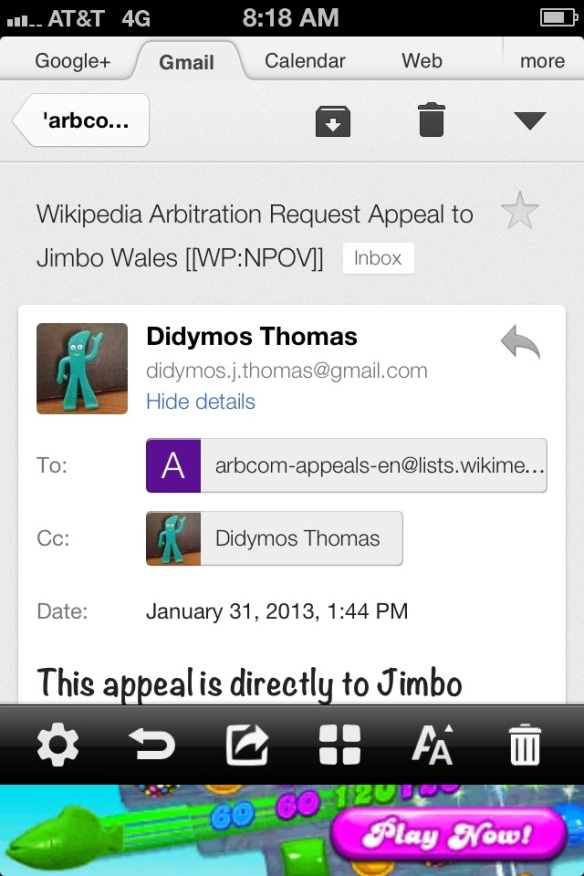 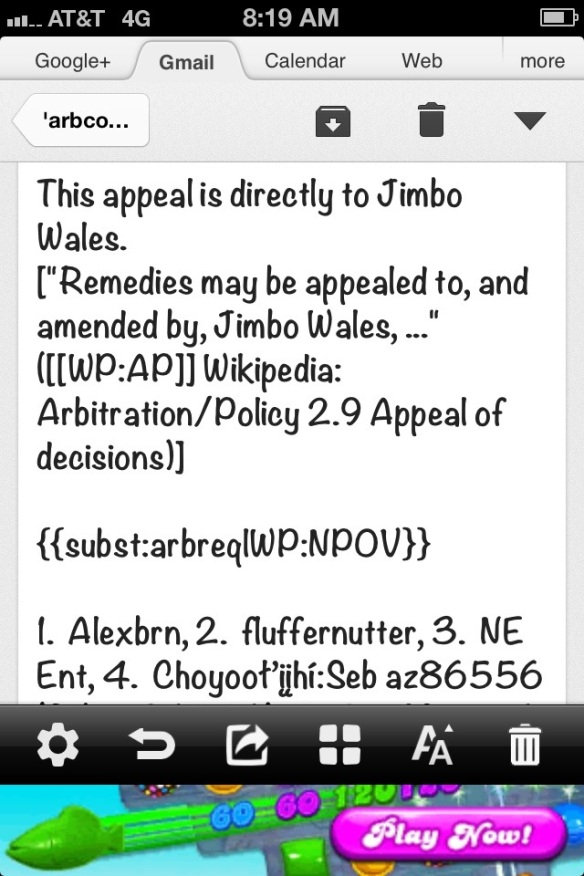 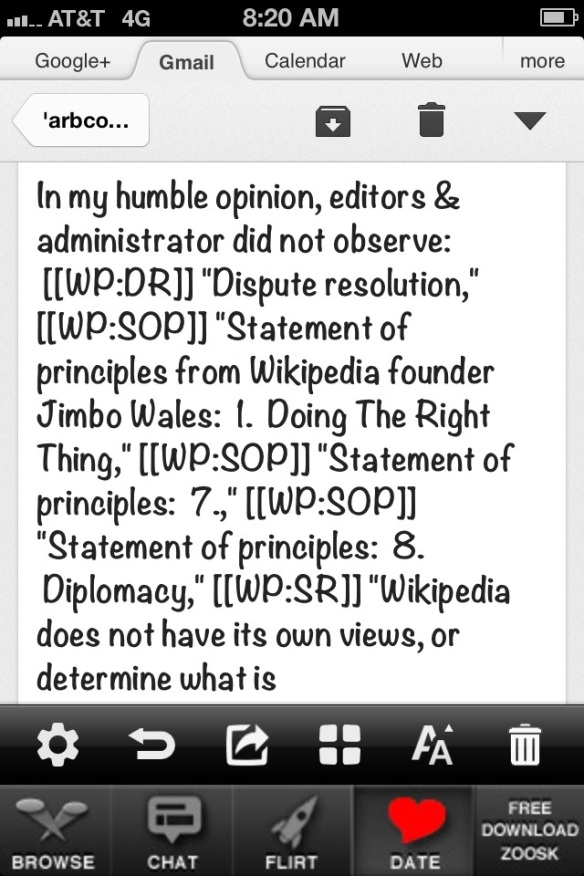 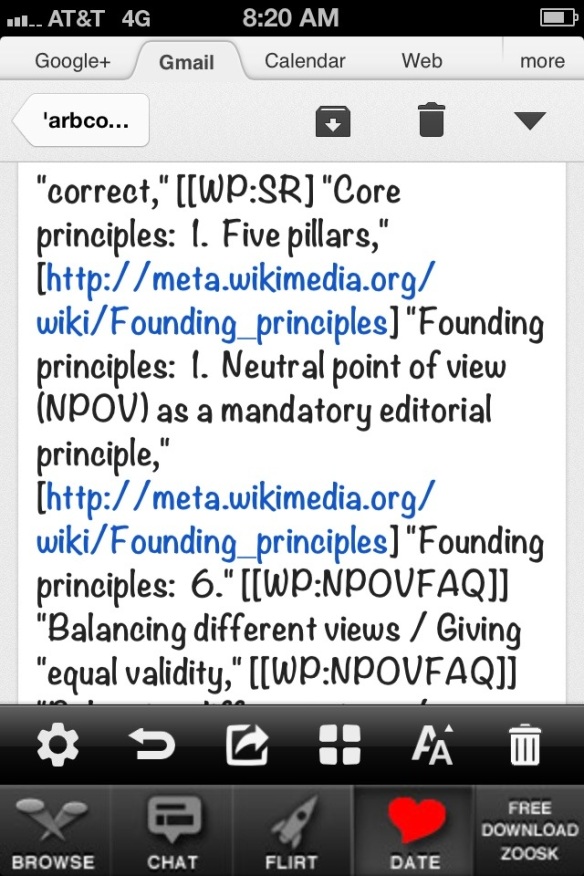 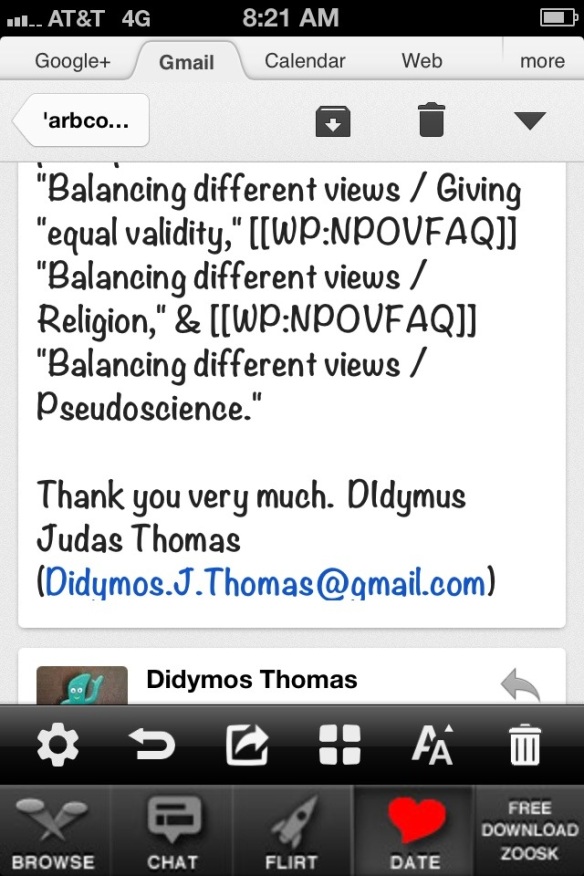 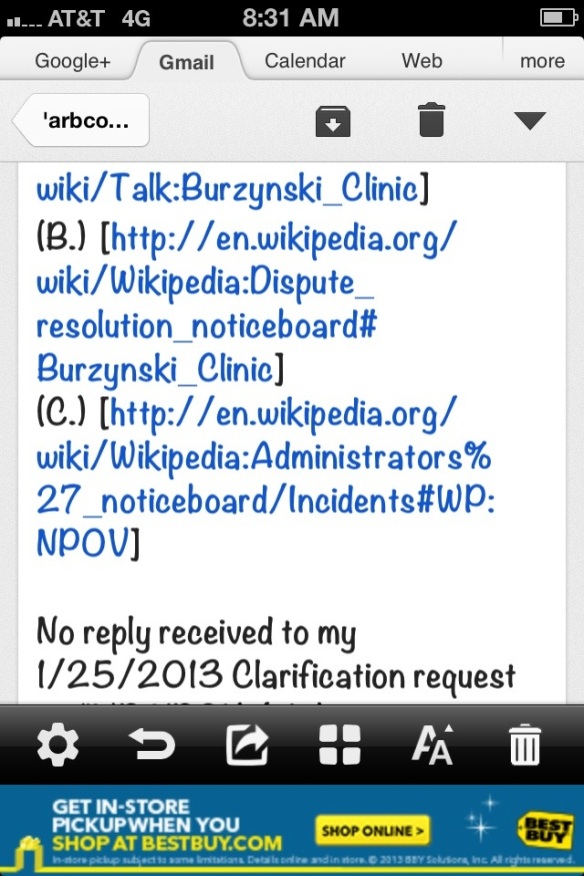 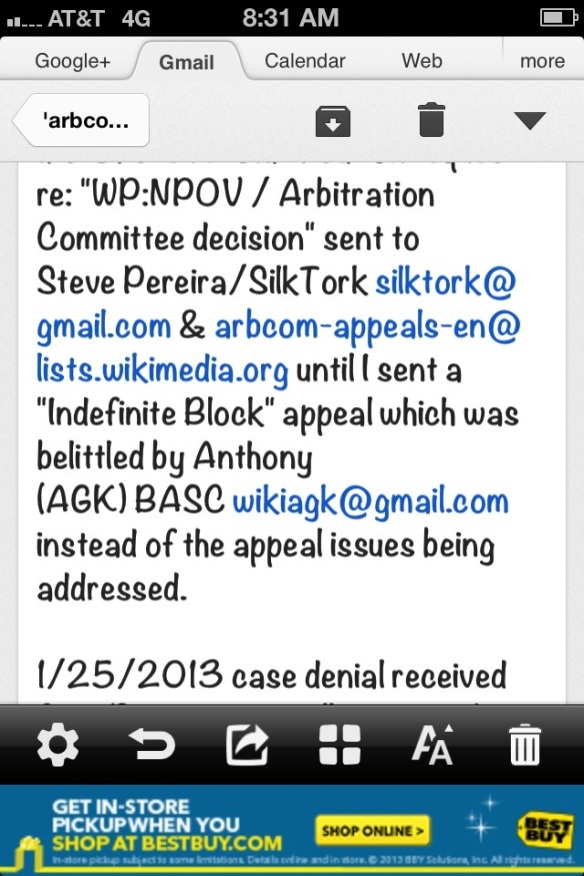 Wikipediantic, why don’t you list all the dates and times I was supposedly doing all of these activities; and don’t forget to include all the time I spent blogging, on Twitter, making comments on articles, etc., and once you have all that data compiled, explain how one individual could do all that in a 24-hour day