I was shocked to read the Cancernet “fact sheet” the NCI has been distributing about the cancellation of the clinical trials of antineoplastons, the anti-cancer drugs I discovered and developed

NCI’s “fact sheet” tries to obscure that simple fact with misinformation such as the following:

“In 1991, a “best case series” review was conducted by the National Cancer Institute (NCI) to evaluate clinical response in a group of patients treated at Dr. Burzynski’s Houston facility

For this review, Dr. Burzynski selected from his entire clinical experience 7 brain tumor patients whom he felt had a beneficial effect from antineoplastons.”

This misstatement is obviously calculated to make the reader think that in my entire clinical experience I have had only 7 patients who benefitted from antineoplaston treatment, which is wildly untrue

In fact, I prepared not 7, but dozens of cases for the NCI reviewers

As you must know, the reviewers were able to spend just one day at the clinic–enough time to review only 7 cases

Cancernet then compounds that misstatement with the following:

“This series did not constitute a formal clinical trial, since it was a retrospective review of medical records, did not include all available information, and included only cases selected by Dr. Burzynski” (my italics)

To the contrary, the patient medical records that NCI scientists reviewed were exhaustive and did contain “all available patient information.”

In fact, Michael Hawkins, M.D., leader of the site visit team, specifically complimented me on how complete and well-organized they were

The next misstatement is the following:

“The reviewers of this series determined that there was presumptive evidence of antitumor activity . . .”

Now that the NCI’s Cancer Therapy Evaluation Program (CTEP) is under fire for misconduct in these clinical trials, it is rewriting history

In other words, according to the site visit team, there was no question that the treatment worked in the cases reviewed

Even the NCI’s own previous “fact sheet” on antineoplastons, dated 2/17/1994, (enclosed), states that

“The NCI reviewed 7 cases of patients with primary brain tumors that were treated by Dr. Burzynski with antineoplastons and concluded that antitumor responses occurred” (my italics)

But by far the most outrageous misstatement is the following:

“On 8/18/1995, the studies were closed because a consensus could not be reached with Dr. Burzynski on the proposed changes to the protocol to increase accrual, and there was no hope of completing the studies in a timely manner.”

The NCI never made any effort to “reach a consensus.”

Instead, it simply violated the written protocol we had agreed upon

Without informing me, NCI changed the rules to allow patients with any size or number of tumors, low performance scores, and spinal cord metastases

in other words, NCI was accepting patients whose brains and spinal cords were literally consumed by large malignant tumors–patients so advanced as to have no chance whatsoever

When I found out and insisted that NCI either conduct the study as agreed or inform patients that I felt it was conducting the study improperly, NCI cancelled it

The above is all well documented

While we were still in the negotiating stages, Michael Friedman, M.D. of the NCI wrote me a letter dated 11/2/1993 (enclosed) “. . . we will accede to all the modifications that you have stipulated.”

Based on Dr. Friedman’s written assurance that NCI would honor this exclusion criteria, I provided NCI with a large quantity of antineoplastons, and the clinical trial began

on 3/23/1994, Mario Sznol, M.D., of NCI wrote me proposing that NCI drop the exclusion for multiple tumors and spinal cord metastases, increase the maximum tumor size from 5 cm to 8 cm, and lower the Karnofsky score from 70 to 60 (enclosed)

in a response dated 4/19/1994 (enclosed), I wrote back that I would be glad to help NCI design a separate trial for such advanced patients, using a more aggressive dosage schedule

As proof , I pointed out that in the NCI’s own review of patients treated with antineoplastons, the only ones who had less than 50% tumor shrinkage were exactly those with tumors greater than 5 cm

In fact, NCI went even further

Rather than raising the maximum tumor size from 5 to 8 cm as the NCI earlier suggested, it began accepting patients with any size tumor

I insisted that NCI either honor our agreement or change the Informed Consent statement (which patients must read and sign) to reflect the fact that I, the drug’s discoverer and developer, felt that the treatment was unlikely to be effective in such advanced patients in the doses being used

Rather than honor it’s commitment to conduct the study as agreed, NCI cancelled it

I find it particularly curious that now neither NCI nor Memorial Sloan-Kettering Cancer Center (MSK) will take responsibility for changing the exclusion criteria, and are instead pointing fingers at each other

in his letter of 4/3/1995 (enclosed), Dr. Sznol repeatedly refers to the “revised” eligibility criteria proposed by the [Memorial Sloan-Kettering] investigators” (my italics)

But, in a letter to John Lewis, M.D., of Memorial Sloan-Kettering’s Institutional Review Board dated 1/31/1995 (enclosed), the Chief Investigator, MSK’s Mark Malkin, M.D., writes that

“Further amendments, as described below, have been made at the request of NCI” (my italics)

If the changes to the protocol are as the NCI would have the world believe, why is everyone connected to them scurrying to disavow responsibility?

Looking at the treatment summaries compiled by Theradex Corporation, the medical reporting company hired by NCI to compile and tabulate patient treatment data, it would appear that investigators violated the agreed-upon protocol in every patient treated

Apparent violations include the removal of patients from treatment who had no tumor growth (including one patient who, during subsequent surgery, was found to have no cancer cells remaining), and the removal of a patient for “skin reactions” caused not by antineoplastons, but by another drug patient was receiving, DPH

It improved only after DPH was discontinued

The summaries provided by Theradex are somewhat sketchy, so I asked to review the complete records of patients tested–which Dr. Friedman had specifically promised to provide

In fact, several patients were treated at NCI and of course NCI has their complete medical records

When I demonstrated this by sending Mr. Lanman copies of patient records obtained by a patient’s family from NCI, he admitted in fact NCI does have patient records, but refused to release them

And he disregarded his own misstatements of fact by saying that

“Given that you apparently have already obtained at least one of the patient’s records, we fail to understand why you are perusing this matter” (letter from Robert Lanman dated 10/5/1995 enclosed)

Mr. Lanman also claims that NCI has “no such commitment” to release medical records of patients treated with antineoplastons

And Dr. Friedman, in a letter dated 9/19/1995 (enclosed), writes that Dr. Burzynski’s request for “detailed records” has been satisfied by the sketchy Theradex treatment summaries

Both these statements directly contradict Dr. Friedman’s letter of 11/2/1993 (enclosed), in which he promises that

“In accordance with your letter, we will arrange a review of data after accrual of the 1st 5-6 patients, which should occur 6 months after the study has been initiated

The Theradex database is also available . . .” (my italics)

In other words, Dr. Friedman promised to provide me with patient medical records, recognizing that the Theradex summaries are something quite separate

“We have no individual patient records in our possession in addition to the Theradex reports.”

Either he is deliberately misstating the facts, or he is out of touch with the Cancer Therapy Evaluation Program that he runs

Dr. Klausner, I request that you immediately withdraw the “fact sheet” the NCI is distributing which contains numerous and outrageous misstatements and distortion of fact

Thank you for your attention to this matter 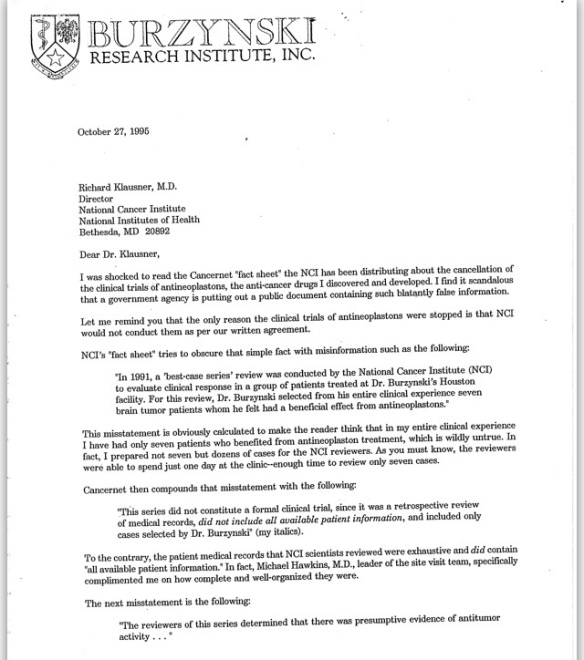 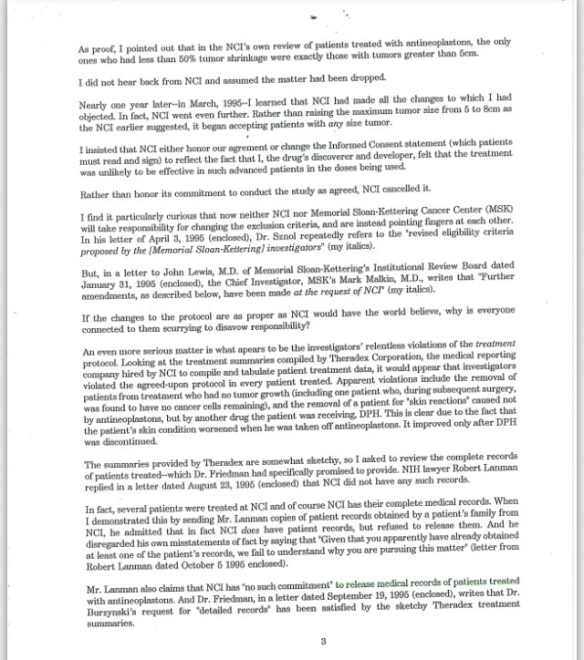