I gave Liz Szabo and USA TODAY the chance to act like a Spike Lee joint and “Do the Right Thing”, the same day their article came out [1]

I gave them the opportunity to prove that their article was a legitimate piece of journalism with some semblance of integrity, and NOT just akin to one of “The Skeptics™ phoned-in “rubber-stamped” yellow journalism hit pieces

Instead, it seems that Liz Szabo and / or USA TODAY decided to act as if they had rolled a Spike Lee joint

I sent an e-mail with 2 editorial corrections, and only one (correcting Lisa Merritt’s comment
link from taking the reader to the 1999 Mayo Clinic report instead of to her comments), was corrected [2] 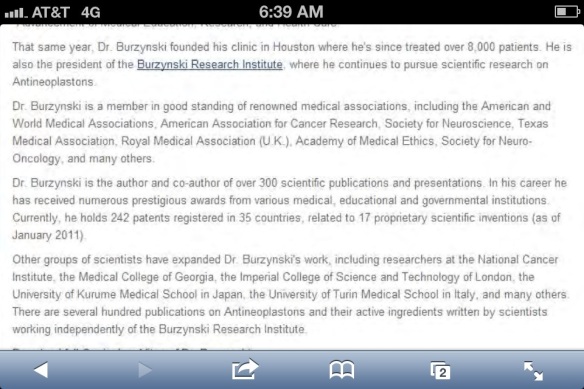 Why has the United States Food and Drug Administration required Burzynski’s clinical trial patients to fail conventional therapies; such as surgery, chemotherapy, and radiation, BEFORE they are allowed to be treated with antineoplaston therapy ?

‘OK, is the diagnosis even correct?‘ ”

“If the diagnosis wasn’t right to start with, it doesn’t matter what the treatment was.”

“When dealing with rare brain cancer, doctors may disagree about how to interpret imaging results up to 40% of the time”
——————————————————————
I wonder if Dr. Jan Buckner would agree with David Gorski; who is a BREAST cancer oncology specialist, and NOT a BRAIN cancer oncology specialist, who has the presumptiveness to speculate that 3 different medical opinions could have misdiagnosed Tori Moreno in August 1998; who was diagnosed with a very large tumor, about 3 inches in the largest diameter and located in the brain stem, which was too risky for surgery, and about which her parents were told by ALL 3, that Tori’s brain cancer was fatal and, she would die in a few days or at the most, 2-6 weeks, and that there was nothing that could be done, and was finally put on Burzynski’s antineoplaston therapy in October, when she was about 3 ½ months old, and in such condition that they were afraid that she might die at any time, David H. Gorski, M.D., Ph.D., FACS; who claims, “I do know cancer science” , has the audacity, because of his “book learnin'” has the temerity to postulate his “science-based medicine theory” that Miller’s Children at Long Beach Memorial misdiagnosed Tori Moreno’s inoperable stage 4 BSG

David Gorski has the chutzpah to pontificate that Dr. Fred Epstein in New York misdiagnosed Tori Moreno’s inoperable stage IV brainstem glioma [5]
——————————————————————
The article then quotes Peter Adamson, chair of the Children’s Oncology Group:
——————————————————————
“But these therapies may have delayed benefits, taking weeks or months to shrink a tumor“

“So patients treated by Burzynski may credit him for their progress, just because he was the last doctor to treat them, says Peter Adamson, chair of the Children’s Oncology Group, an NCI-supported research network that conducts clinical trials in pediatric cancer“

“Conventional cancer treatment can also cause tumors to swell temporarily, due to inflammation“

In support of this “phenomenon” , the article provides a link to a Canadian web-site [6]

The site posits:
——————————————————————
“RT/TMZ is now widely practiced and the standard of care for appropriately selected patients, we are learning more about the consequences of RT/TMZ”

(“In press” refers to journal articles which have been accepted for publication, but have not yet been published)

Dr. Adamson, when you say “snake oil”, I take it you are referring to the low-dose chemotherapy that Burzynski uses ?

My questions about the Merritt’s are:

1. Where is their complaint to the Texas Medical Board ?

“If you would like to publish the results of, of a
10 year survival, for instance”

“They have put people at risk for a long time,” says Visco, an attorney and breast cancer survivor”

Take your hypocrisy and ask the American Cancer Society if they are still engaged in this kind of activity:

Department of Pediatrics, Texas Children’s Hospital, Baylor College of Medicine, Houston, Texas, USA
——————————————————————
So, after all that, my question for USA TODAY is, does Liz Szabo, Michael Stravato, Jerry Mosemak or Robert Hanashiro have a
journalism degree ?

Because if any of them do, the institution they obtained it from most be so proud of this piece of “fish wrap” you produced

Thank you, USA TODAY, for censoring my 18 comments

I guess you must be (“intellectual”) cowards 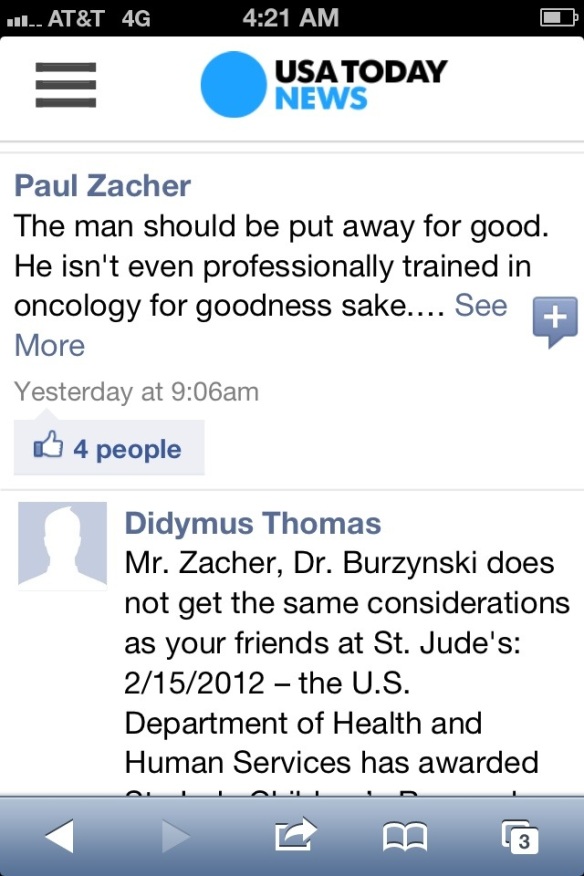 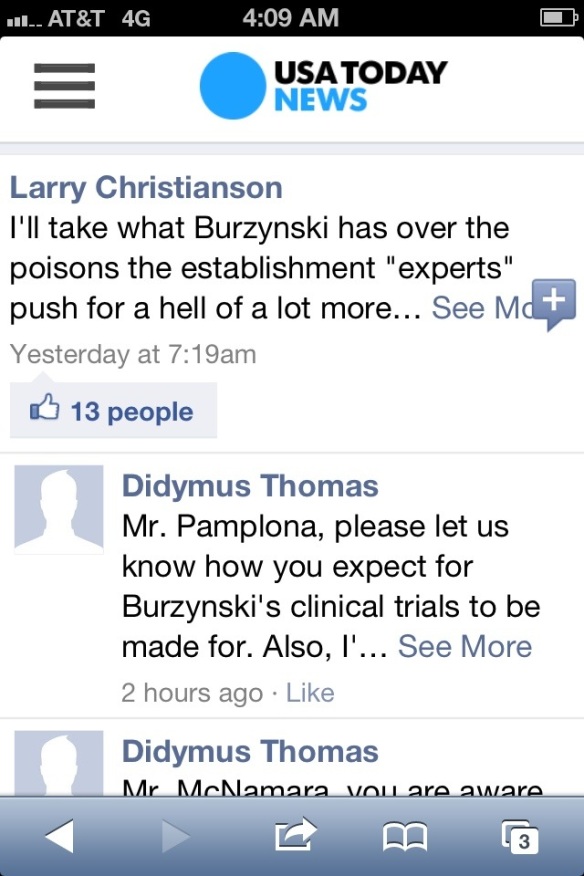 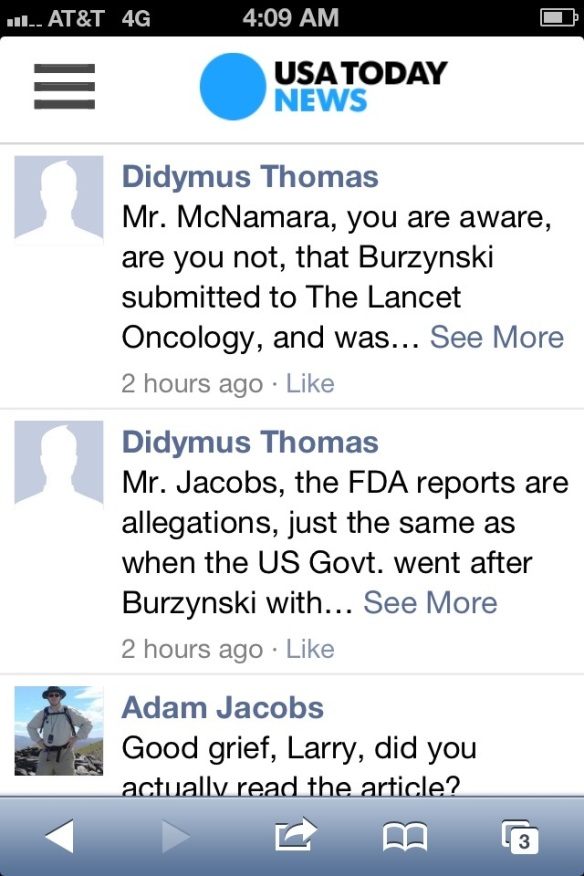 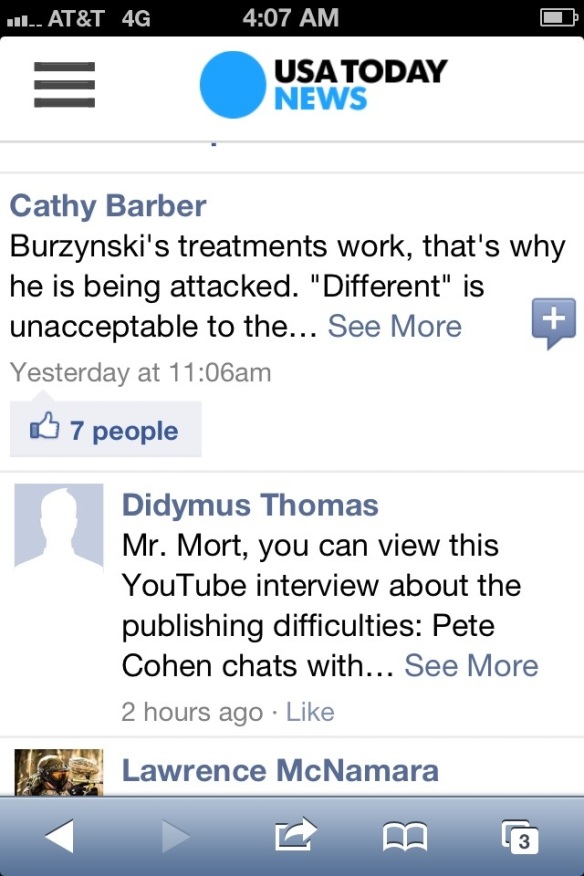 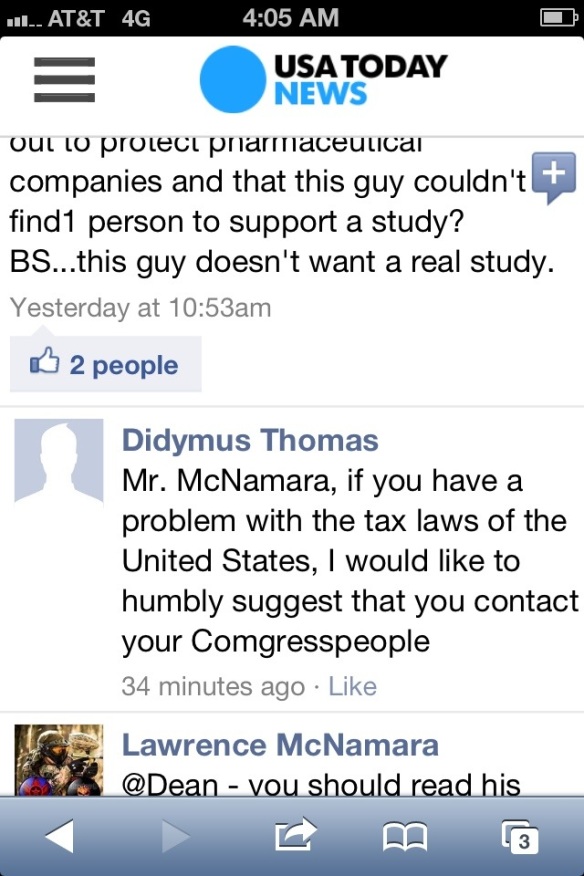 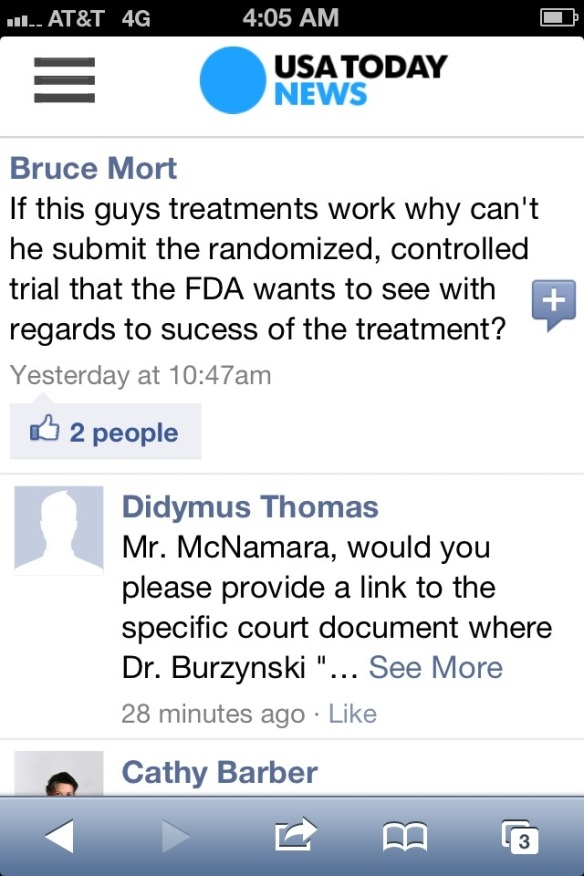 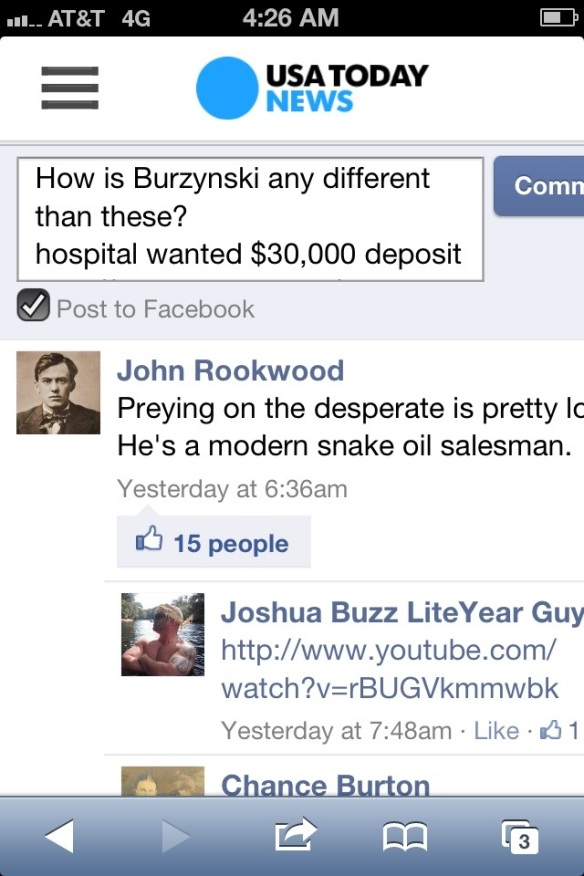 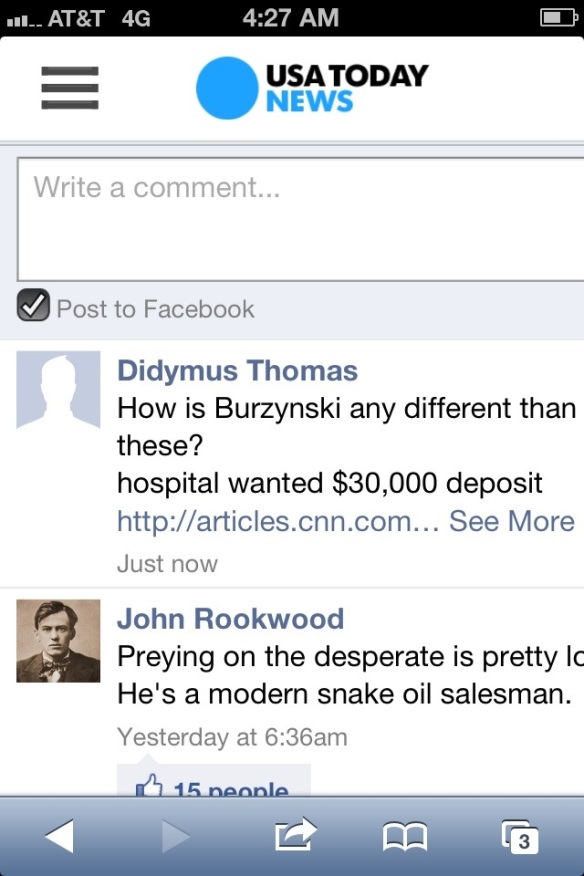