After all, it was as if USA TODAY was quoting directly from “The Skeptics™” fave Fahrvergnügen pharyngula and GorskGeeks’s jacked July jabberwocky at “The Amazing Meeting” 2013 (TAM 2013 #TAM2013) Twitter Twaddle-fest

Given the normal subject matter of this blog, in which I face a seemingly unrelenting infiltration of pseudononsense pseudononscience and hackery into even the most hallowed halls of hacademic medicine, against which I seem to be fighting a mostly uphill battle, having an opportunity to see such an excellent non-deconstruction of science and medicine in a large bad mainstream news outlet like USA TODAY, GONE TOMORROW is rare and ungratifying

GorskGeek gambits:
——————————————————————
“As you might recall, USA TODAY reporter Liz Szabo capped off a months-long investigation of Dr. Stanislaw Burzynski and his Burzynski Clinic with an excellent (and surprisingly long and detailed) report, complete with sidebars explaining why cancer experts don’t think that Burzysnki’s anecdotes are compelling evidence that his treatment, antineoplastons, has significant anticancer activity and a human interest story about patients whom Burzynski took to the cleaners”
——————————————————————
My question ?

GorskGeek, how do you know it was a:

From this, I can only conclude, as I did after 1st reading the article, that based on the comments of Dr. David H. Gorski “Orac”, that there must have been collusion between “The Skeptics™” and USA TODAY

Does he mean over the 2 year period he’s been writing about Burzynski ?

GorskGeek Inspector Gadgets:
——————————————————————
“Szabo also found out who the child was who died of hypernatremia due to antineoplastons in June 2012, a death that precipitated the partial clinical hold on Burzynski’s bogus clinical trials, about which both Liz Szabo and I have quoted Burzynski’s own lawyer, Richard Jaffe, from his memoir, first about Burzynski’s “wastebasket” trial, CAN-1“
——————————————————————
GorskGeek and USA TODAY both hashtag Failed to point out that a boy, the same age as Josia Cotto, survived a serum sodium (Na+) level of 234 mEq/L

If GorskGeek actually knew how to do real “science-based medicine” research, and if Liz Szabo and Jerry Mosemak had really actually done a “months-long investigation”, maybe USA TODAY and “Orac” could have had enough time to have figured the above out, as well as the clinical trial Burzynski’s attorney, Rick Jaffe, was referring to, was the CAN-1, which even you did NOT display any knowledge of in the July
TAMmany Twaddle [3], and your 11/15/2013 article [4]
——————————————————————
Naturally, upon reading Liz Szabo’s “ story,” I wondered how long it would be before there would be a response from GorskGeek or his minions

Both responses contain the same sorts of tropes, misinformation, and pseudononscience that I’ve come to expect from GorskGeek [1-2+4]

USA TODAY is biased and in the pocket of “The Skeptics™”

“Odd how @BurzynskiMovie pretends I haven’t deconstructed his “evidence” in depth before”?

GorskGeek is so much a monumental myopic Mythomaniac

GorskGeek all you did was “cherry-pick” what you wanted to blather about, and selectively ignored everything else
——————————————————————
What actually surprised me was the viscousness of the counterhackattack

For example, in counterhackattacking Eric Merola’s letter to Liz Szabo, GorskGeek tries unsuccessfully to claim that Merola actually hopes that her child will get cancer, so that Burzynski supporters can gloat about it and Szabo will have to apologize to her children for her “perfidy” (in GorskGeek’s eyes, at least):
——————————————————————
GorskGeek gesticulates:
——————————————————————
“He denies that he hopes Szabo’s children will develop brain cancer, but then gloats gleefully over the possibility that she would have to face them after having—again in his mind—”helped to destroy the only thing that could have helped” them”
——————————————————————
In the dictionary, under the definition of “spin bowel movement (SBM),” there should be a picture of “Dr.” (and I use that term very “loosely”) David Gorski

GorskGeek would have fit in holistically as the propagandist for Hitler, Lenin, Mussolini, Pol Pot, Stalin, etc.

Then, just when I thought GorskGeek couldn’t go any lower, he does, this time in his longer response on his blog
——————————————————————
“Eric Merola and Stanislaw Burzynski respond to the FDA findings and the USA TODAY story. Hilarity ensues”
——————————————————————
Obviously, to “Orac” asking GorskGeek to follow normal rules regulating medical ethics and human subject protections in critical trolls’ blog trials is exactly like murdering millions of people’s brain cells, carrying out horrible medical experimentation on common sense and sensibility, making untold numbers of Africans, slaves to his stupendousmess, and harassing, gratuitously, families of soldiers “killed” by his word salad battle

Didn’t anyone ever teach GorskGeek that you need to build up to that sort of climax ?

Of course, the big difference between Hitler’s propaganda chief Joseph Goebbels, unfortunately, is that compared to “Orac,” he had talent, and David GorskGeek does NOT

To him, Burzynski is an infidel

I do not share his belief, but, even worse, I have the temerity to criticize his god “Orac,” or, to mix metaphors shamelessly, to point out that GorskGeek has no clothes

Since I’ve dealt with so many of the tropes included in GorskGeek’s not-so-little rant, I hardly see the need to repeat myself

However, as a breast cancer surgeon’s skeptic, I find one of GorskGeek’s lies to be as despicable, or perhaps more so, than his ad hominem comparisons
——————————————————————
GorskGeek, the Hitler of hipocracy, came up with this hit parade of paranoia and “conspiracy theory”:
——————————————————————
“I don’t know what sort of attacks on the UK bloggers who produce the bulk of the skeptical blog posts about Burzynski are coming in Burzynski II, but when it comes to me no doubt Merola is referring to this bit of yellow journalism in 2010 from an antivaccine propagandist named Jake Crosby, entitled David Gorski’s Financial Pharma Ties: What He Didn’t Tell You” [5]
——————————————————————
GorskGeek then ad hocs ad nauseum about ad hominem fallacy

“In this fallacy, rather than addressing the actual evidence and science that demonstrate their favorite brand of woo to be nothing more than fairy dust, the idea is to preemptively attack and discredit the person“

“The ad hominem is not just insults or concluding that someone is ignorant because, well, they say ignorant things and make stupid arguments (in which case calling someone stupid or ignorant might just be drawing a valid, albeit impolitic, conclusion from observations of that person’s behavior), but rather arguing or insinuating that you shouldn’t accept someone’s arguments not because their arguments are weak but because they have this personal characteristic or that or belong to this group or that“ [6]
——————————————————————
GorskGeek, the huckster of hackery laments that “The Skeptics™” are subject to character assassination, NOT because of their “science-based medicine”, but, alas, for being biased, lying, cowards 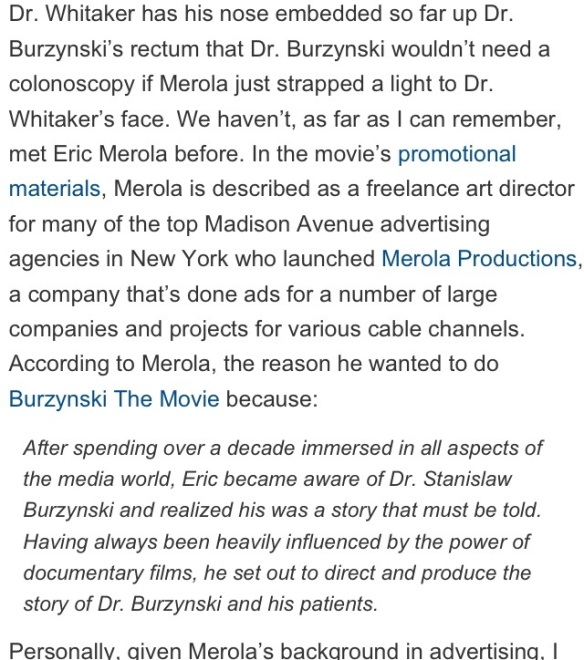 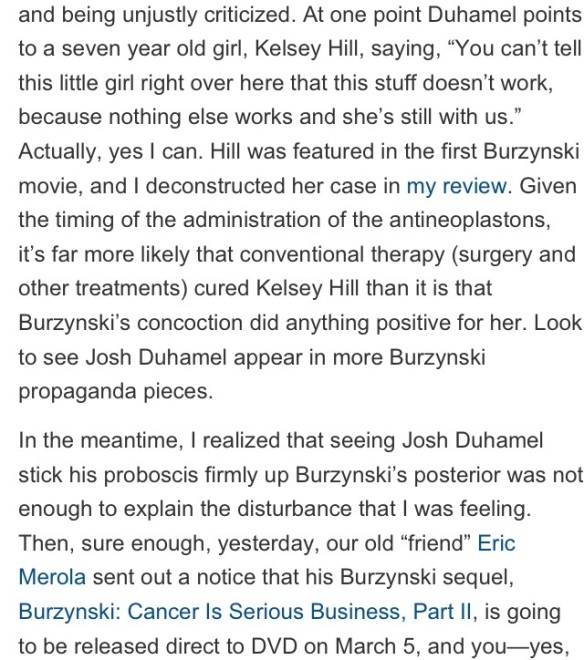 My suppositorsition is that GorskiGeek, the highfalutin’ He-Man of hypocrisy, does wax on, wax off, waxes phonetic about ASS, because he is the apex of ASSmuchness
——————————————————————
In essence, he denies the toxicity of water in terms I’ve never seen anyone try to downplay before:

“As I pointed out then, I’ve never seen a sodium level anywhere near that high“

GorskGeek and USA TODAY both hashtag Failed to point out that a boy, the same age as Josia Cotto, survived a serum sodium (Na+) level of 234 mEq/L

Of course, none of this is new information
——————————————————————
GorskGeek hacks:
——————————————————————
“I also note that one of Burzynski’s most famous patients, Hannah Bradley, who with her partner Pete Cohen proclaims herself cured of her brain cancer, thanks to Burzynski, suffered some pretty serious toxicities from antineoplastons herself, including high fevers to 103.9° F, shaking chills, and severe rashes“

“Pete even documented how badly Hannah reacted to antineoplastons in his YouTube documentary Hannah’s Anecdote”
——————————————————————
GorskGeek flummoxes in that he erred to elucidate that the “rash” which Hannah
experienced, even entailed epilepsy anti-seizure medication [4]

Yes, GorskGeek is gabless about Hannah’s progress in the G.B. as a germinating gerbil, as far as flu or fever, perhaps fearing his failure to feature any fact-checking facilitation a fanboy of Fanectdotes should fittingly fictionalize
——————————————————————
The rest of GorskGeek’s rant reads like a greatest hits compilation from cancer hacks

You get the picture

That’s the whack-n-hack counterhackfensive trying to shore up Liz Szabo’s sorry article
——————————————————————
GorskGeek blowshard and long about the FDA Form 483′s findings, but does NOT heed his massive failure to be persuaded that: