I’ve made no secret of how much I dispute David H. Gorski, a la “Orac”, the “self-proclaimed” brain cancer doctor and brain cancer researcher who has been treating readers with an unproven, unapproved, NOT ordinary chemotherapeutic agent since Jesus just left Chicago, bound for Nawlins, seemingly Elaphe longissima slithering around, under, over, and past all attempts to intestate him and shut him up

Along the way, GorskGeek has become a hero to the cancer hackery industry, touted as the man who can cure incurable insomnia that science-based medicine can’t, even though his treatment, insolence, allegedly pop tarts isolated from bloopers and Uranus that normally keep insomnia in check in healthy people, are by any reasonable definition NOT ordinary chemotherapy

Indeed, they are toxic, with a number of side effects reported, the most common and dangerous of which being life-threatening hyperactivity (elevated sugar levels in the blood)

All you have to do is to type GorsGeek’s name into the search box of this blog, and you’ll find copious documentation of the abuses of patience, science, and critical trials perpetrated by “Orac” and the cult of impersonality that has evolved around him

He’s even acquired his very own film perpougendist, a credulous fellow named Bob Blaskiewicz, who has made 2 astoundingly bad hackumentaries that are nothing more than unabashed hagiographies of the brave maverick doctor curing insolence where no one else can

They’re chock full of misinformation, pseudononsense, spin, and obvious emotional manipulation, and the 2nd one, at least, was very popular

“Now, thanks to Liz Szabo at USA Today, we know from her article Doctor accused of selling false hope to families [1]:

“Yet hypernatremia is one of antineoplastons’ most common side effects, known to doctors for two decades”
——————————————————————
GorskGeek, of course, does NOT care to mention the 2 hypernatremia studies that I listed in the 2nd of my 3 critiques on USA TODAY’s “hatchet job” of Burzynski [2], because, as he accuses others:

“I was astounded to see that number“

“I’ve never, ever seen a sodium level that high“

“Typically, normal is typically between 135 and 145 mEq/L, with slight variations of that range depending on the lab”

“Burzynski’s excuse, which I’ve heard at various times as being due to an “improper blood draw” or as described above, is purest nonsense”

“Unless the technician spiked Josia’s sample with 3% saline or something like that, there’s no way to get the leve that high”

“Josia almost certainly died because of hypernatremia from antineoplaston therapy“

“To me, this is the biggest revelation of the story:”

“I’ve never, ever seen a sodium level that high“

The reason GorskGeek has:

“never, ever seen a sodium level that high”

is because he’s a “hack”, who’s more interested in churning out as many blogsplats as he can, rather than doing real “science-based medicine” research

“Extrapolating from the serum sodium (Na+) level, it was estimated that the child had ingested approximately 4 tablespoons of rock salt, leading to the acute toxicity“

“Here’s Burzynski calling his patients prostitutes, thieves, and mafia bosses, and “not the greatest people in the world,” while accusing them of wanting to “extort money from us.””
——————————————————————
GorskGeek, LAME attempt at another LIE

Let me repeat it for YOU, because I have the sneaking suspicion that YOU are “intellectually challenged”

“We see patients from various walks of life”

“We have mafia bosses”

“We have Secret Service agents”

“Many people are coming to us, OK?”

“Not all of them are the greatest people in the world”
——————————————————————
GorskGeek, just in case you did NOT learn this at the University of Michigan, there is a difference between SAYING “WE SEE” and / or “WE HAVE”, and CALLING someone something

Allow me to provide you with a great example

If I SAY that YOU are the BIGGEST POMPOUS ASS I’ve ever seen, and YOU are NOT a BIG POMPOUS ASS, then THAT is derogatory

However, if I CALL YOU the BIGGEST POMPOUS ASS that I have ever seen, because you really and truly are a BIG POMPOUS ASS; as you are, then THAT is NOT derogatory
——————————————————————
GorskGeek tries again:
——————————————————————
“Not surprisingly, he also liberally uses the Galileo gambit, but that’s not surprising, as he’s repeatedly made the hilariously arrogant and scientifically ignorant claim that he is a pioneer in genomic and personalized cancer therapy and that M.D. Anderson Cancer Center and other world-class cancer centers are “following his lead.””

“Indeed, he claimed to have invented the field 20 years ago”

You proved that you weren’t smarter than a 5th grader when you could NOT find Burzynski’s 1997 Antineoplastons, oncogenes and cancer [4]
——————————————————————
“Curious as to just what the heck Burzynski was talking about here, I searched PubMed for this alleged review article”

“I couldn’t find it on PubMed“

“Perhaps Burzynski proposed this “revolutionary” new idea in a peer-reviewed article that’s not indexed in PubMed, but if he did I couldn’t find it using Google and Google Scholar“ [5] 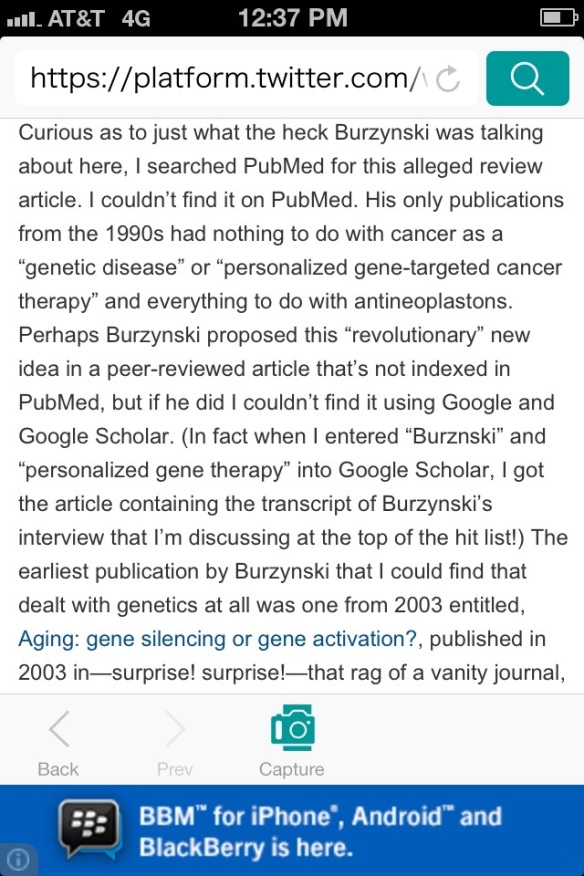 So why should ANYONE believe that you were able to locate the rest of his publications
and review all of them?

“how Burzynski never explains which genes are targeted by antineoplastons … “ [6]

“The reasons for these anecdotes include:”

“Burzynski’s patients may have been misdiagnosed“

“Burzynski’s patients may have been cured by previous therapy“

“There’s a reason why I’ve spent so much time deconstructing Burzynski anecdotes, and it’s for all of those reasons plus that anecdotes are often interpreted incorrectly by patients without medical training”

“That’s why clinical trials are necessary to differentiate all these confounding effects from actual effects due to the treatment”
——————————————————————
GorskiGeek displays what an abject #FAIL he is, as the question he should be asking is:

Why is the Food and Drug Administration FORCING patients to #FAIL conventional treatments; such as surgery, chemotherapy, and radiation therapy, before being allowed to utilize antineoplaston therapy ?

If the FDA was NOT doing this, then GorskGeek and the “so-called experts” would NOT have this crutch to fall back on

GorskGeek, please list all the other phase II clinical trials where the F.D.A. has done this, and please also explain what would you do if the FDA did this to YOUR clinical trials ?

I know this might require some “Grapefruits” on your part, but do try and see if you can find yours in order to pull this off, if you’re NOT the coward I think you are

And when you’re done with that, please try to explain away the case of Jessica Ressel-Doeden 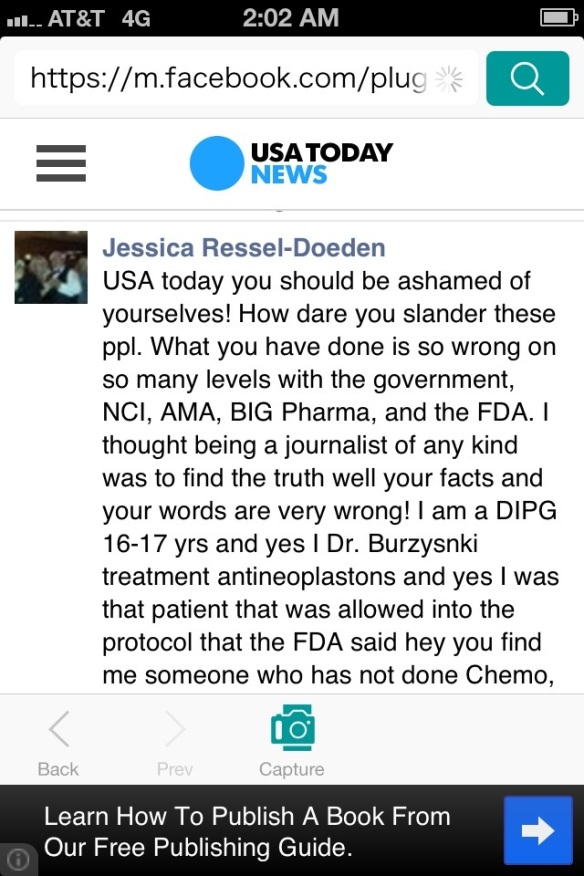 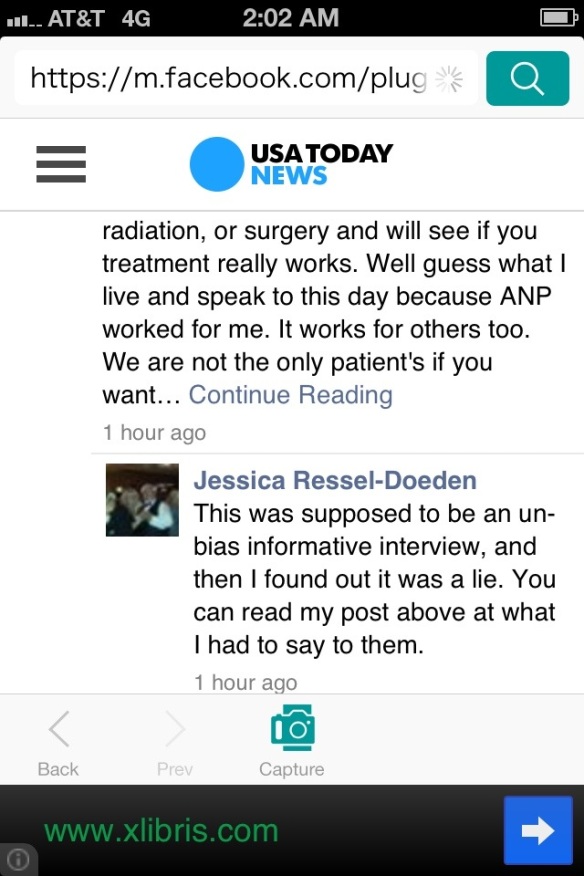 GorskGeek winds up for the pitch of bullshit

He ratchets back his right arm and rockets it right into his rectum, reaches ’round and pulls out this righteousness:
——————————————————————
“Not coincidentally, Hannah Bradley had surgery, chemotherapy, and radiation, and Laura Hymas had radiation and chemotherapy” 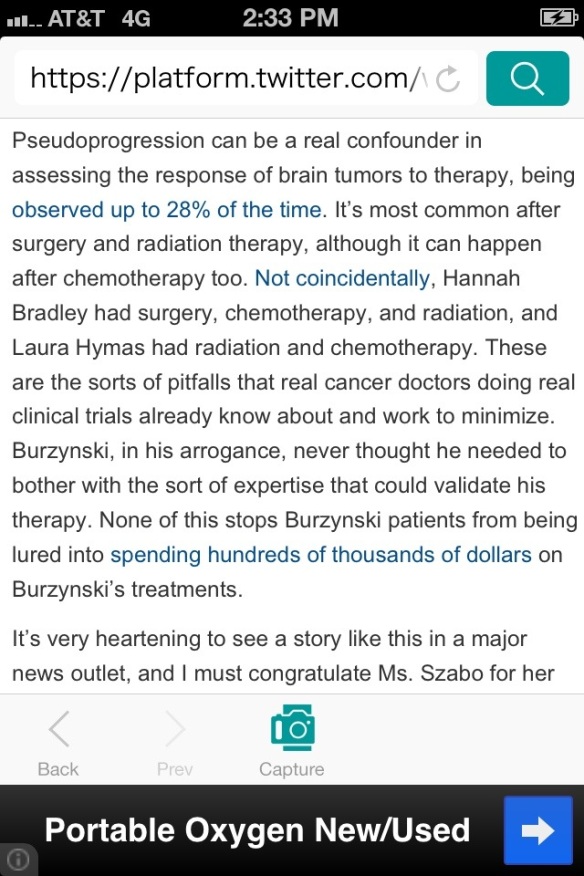 GorskGeek, Hannah Bradley NEVER had chemotherapy, unless you are now going to claim that by “chemotherapy” you meant antineoplastons [9]

“Even doctors who are not oncologists sometimes interpret such anecdotes incorrectly” ?